Showing posts from August, 2018
Show All

in the street of the sky night walks scattering poems

(e.e. cummings)
in our cities and towns, we do not see the vast landscape of the sky:

street after street is full of the tiny false lights of earth –
the electric radiance makes a haze sky-obscuring, sky-dimming, sky-shrinking;

night in its glory appears only as a street –and who walks in that street? it looks badly-lit, a mere

scattering of pin-prick stars insufficient to light poems, lovers or the sky itself ...

**********
in the wild places, though (some do remain) the expanse of sky, fully revealed, is nothing like any

street; it is an ocean, and we sail anywhere in the ship of waking dreams, of eye-rapture, of endless delight; there

the stars are myriad, countless, bright,  sky-filling, sky-spilling, sky-illuminating, sky-extending –
night is an opening into the whole universe, where the mind walks in amazement, in a joy that stretches thought and confounds sight,

scattering, as the fortunate have discovered, poems of unf…
18 comments
Read more

Owl is my mother, Serpent my father, both are my spirit protectors, Owl at my left side, Snake at my right.
I was led to this knowledge years ago, and liked it. 'Yes!' I said. I said yes. I think that's important.
In some cultures owl is a harbinger of death. To some  she means wisdom, to some deception.
I'm a Scorpio woman. I speak truth, see far, cannot easily be deceived, and move between life and death in a number of ways.
Serpent is wisdom too – a deep, hidden kind – and healing, and transmutation. Its venom has many uses. The shed skins proclaimrebirth.
I am a Scorpio woman; my still waters run deep. I work as a healer and psychic medium.  I've lived many lives in one. I am a witch.
One night, soon after I was told, we drove home late down a long road through trees. An owl, ghostly white, flew in front of us slowly all the way, like a guide.
We arrived home, she glided off. A diamond-backed snake lay sinuously along our verandah, dim in the dark but visible, departing…
13 comments
Read more

If a poem lovely as sunset should live within me somewhere, I'd fetch it out and give to you to wrap around your hair – but your hair is brighter than sunset.
If a poem lovely as a butterfly should wander through my air, I'd send it to go and kiss your lips – but your lips are gentler far  than a poem or even a butterfly.
So, matchless one, I must come without a poem to kiss your soft, sweet lips and stroke your shining hair.

Written for the prompt, Micro Poetry ~ A Poem Lovely As at 'imaginary garden with real toads'.

Under the Southern Cross

Under the Southern Cross

My country has four national flags. Three of them are now official, though only one is THE Australian flag. It's the one I like least.

Mind you, it does have all the stars of the Southern Cross – our own constellation, which I love to see travelling gradually across the year through the vast, beloved night sky.
But in the top corner the Union Jack declares we belong to England – that colonist supreme, that conqueror, which began our nation (on top of the pre-existing) by trampling on justice and the human rights of convicts and 'natives' both.
Though now we're part of a Commonwealth not a fiefdom, the Queen is still our figurehead Head of State, with real power when it comes right down to it: dismissing our elected Government (and Gough) in uproar in 1975.
We like you again now, Liz; and William and Harry and their lovely wives, and the children. And we're a lazy lot. Sooner the beach or the barbie than fighting to be a Republic. But give it time.

Cannot grasp – four days in tingling, numb happiness!
Now that you are with me once more, can see me, I find out my heart.

My fingers can be very calm in touch, although deep with feeling. 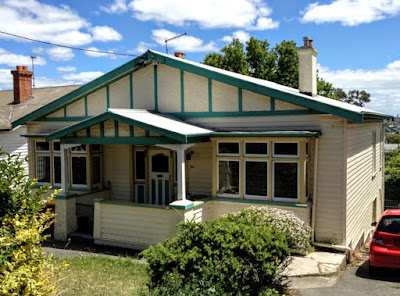 Mrs Aylett next door took in the sick or wounded animals the neighbourhood kids all brought her. (We just knew.)
The house I lived in had a huge back lawn and two willow trees. The wooden swing my Dad made me hung from ropes as thick as my arm.
Our end of the street was in Sandhill; the other end was all the way down into town. I could walk to school without leaving my street.
The women used to talk to each other over their back fences. 'Coooo-ee!' they would call, once the men had gone.
Because we were on the hilly end of the street, we could see from our high windows all the way down into the town centre.
When Ludbrooks store burnt down one night, our neighbours woke us up, and in houses on the hill we all stood gazing from our back windows
watching the huge orange flames and the smoke against the night sky. I was cold in my nightie but I stayed up a long time looking.
There was a big patch of uncleared bush just around the corner from my house, with a shabby old …
16 comments
Read more

Another poem on blog names for Poetic Bloomings

Once upon a time, when MySpace was the best place in the world for meeting other poets, devouring each other’s luscious words, Rob Chrysler (he’s dead now) posted as a joke an ad for auditions of potential porn stars for a movie.
We poets responded with wicked written auditions, all hilarious. I signed mine ‘The Passionate Crone’ (being well past tender years). It caused universal delight. Some of them called me that for a long time after … until
MySpace died (killed off) and most migrated to facebook, which has its uses but isn’t the same. (Did, er, Someone pay the assassins, I wonder now.) I made me another poetry blog out in the wide-world blogosphere, calling it, of course, The Passionate Crone.
Recently it developed a mind of its own, became intractable. Nothing fixed it. Was it just getting old and creaky? Am I? Might this be a sign from the Universe? (I know  I’m too old to flaunt it, but can’t I even joke?)  It’s now an archive. All thi…
21 comments
Read more

Stones for the River

About the name of my second poetry blog, also written (like the previous poem) for Poetic Bloomings. But as it is not itself a 'small stone' kind of observation, it is posted here rather than there.

‘Small stones’ are observations, pieces of mindful writing – looking outside oneself for the beautiful, interesting or strange, as if on a walk you found a stone, brought it home and polished it.
Satya Robyn called them that in 2010 when she invented them and invited the world to play along every day for a month. The world did, creating a river of stones. Some of us continue. Mine are verse; it’s what I do. 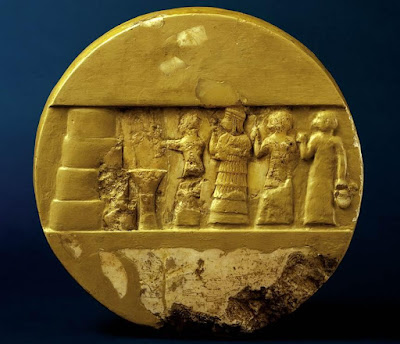 The first author in recorded history, what she wrote was poetry.
She was High Priestess to the Goddess Inanna and also to the Moon Goddess, Nanna.
She was an activist and social reformer. Of course I am – with others – her daughter!

Thought to have been an Akkadian princess,
I see her as the Diana of her age, no less.

On the votive disc we distinguish her by her frills, her circlet, her braided hair.
The men are plainly dressed and bald. But all are priests, all walking tall.
A king's daughter, with Privilege in her dress, she chose a life of constant service.
In my own small way, I too hope to serve. May my ephemeral verses add to Love –
which keeps the world going round, it's said – and in some way, by being, to honour those dead
who came before: each determined ancestor from whom I claim the name of daughter.
Down through countless generations, through many lost and scattered nations,
women have fallen, women have risen, but we know to use the gifts we are given.
Enheduann…
24 comments
Read more

On the Proposition That Poetry Makes Peace

- 8.8.18
On the Proposition that Poetry Makes Peace
Poetry – how is it peace? It might, I suppose, be a bridge over troubled water (as the song goes) – or else a door, entry point into that desired realm ... also the exit.  The exit is usually where the entrance was, we are told rather snidely by some know-all whose name I forget. Yes, as you see, I am feeling not peaceful but snarky.
Pain, physical pain, as I'm often in, does not allow of much peace. Emotional pain can be soothed with poetry – reading or writing it. And is that the function of art, to soothe? Surely, rather, to ignite! Catharsis? Yes, I'll admit of catharsis. It takes poems of grief, extreme, anguished, to give me catharsis of my own grief.
Lollies they ain't, for the crying child, to "make it better". Oceans become suddenly peaceful after great storms. Vast plains may be still after fierce winds flatten the grasses. Even so (ignoring metaphor) those are poems I make with my camera.
Joy and love, though – yes! They'…
28 comments
Read more

Dragged Down, Reaching Up

Grieving. It's a thing I do.

Making me homesick, maybe clouds or birds ...
All transformations are delicate. We find exactly what suits us.
The truth is in the heart, which has its own activity.
Does the knife go in slant? Is it everywhere the same?
The mountains are individual.... Belonging, of course they know….
It's not as if there are fixed answers. I am always crying Yes!
Yet I don't recognise when it comes, arriving immediately.
I've always looked to the sky, seeking instruments of balance.
There has been enough time. We shall mend. And not forget.

Linked to  Poets United's Midweek Motif ~ "a bundle of contradictions"
Yes I know, not as clear and direct as my usual style. I just had some pieces published in a lit. mag. which the editor describes as avant-garde. ('What am I  doing there?' I think – but also very thrilled to be included.) This piece is inspired by, and a response to, some other content. I hope it can stand alone. Written o…
15 comments
Read more
More posts