My cousin remembered seeing, among family papers, a document signed by my great-grandfather. So we knew his profession.

Those papers didn’t come from India to Australia. Destroyed? Maybe left with another branch of the family – long-lost to distance, time, our ageing and dying.

I know some of his story. (Tassie nights around the fire. Older relatives reminiscing, conjuring a different world. We kids, agog, kept quiet so they wouldn’t remember us and send us to bed.)

I heard of his wooing Jane, the legendary beauty (‘very fair’ they said – which I understand differently now). The note smuggled into the orphanage. Escape, elopement.

The nuns were scandalised. Only 14! A High Court judge's daughter! She shouldn’t have been in the room when he came seeking a bride. Spying him through the window, immediately smitten, she snuck in, sitting on a pile of books to look taller. Yes, he chose her; they hustled her out. However....

Now I ponder, what was a child with an important father doing in an orphanage? In the British occupation of India? I think I know.

And he? Pure Portuguese? Another mixture? Anyway they married.

He made her rich. She was nicknamed The Countess. Legend said, if she wanted one cotton-reel, she’d send out for a gross. When she travelled, she hired a whole train for her servants, her dogs…. (My Nana, her daughter – Mum’s mother – was always followed, I remember, by a troop of little dogs.)

Nana – who thought herself a plain girl – crept into balls and parties, hiding behind her glamorous mother. She described dressmakers draping jersey around Jane’s elegant figure, stretching the fabric tight.

He died, the apothecary.

(I never found out how much older. A young man, already in business, needing a wife – up to ten years? Surely no more. But probably not in his teens when they met.)

She married again … died in her turn….

I know what happened to her: deduced her beginnings, know the ending and things in between.

He went looking for a convenient marriage, fell for a beautiful young girl who fell for him – seems they both did well. But I know nothing more of prosperous Léon with the mellifluous name, my great-grandfather.

A 369-word piece of prose, linking to Weekly Scribblings #27 at Poets and Storytellers United: Things Were Different Back Then.

Comments are moderated and will be visible after approval. If you must comment anonymously, please include your name in the comment, just so I know who's talking to me. 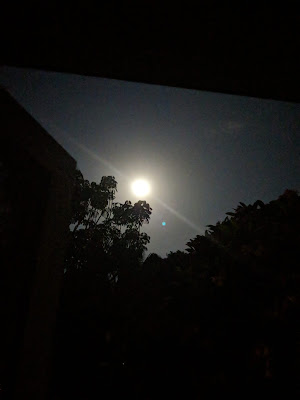 Poem for Beltane Night This Beltane is marked by storms. Much later, all quieted, I go out to find the full moon high behind trees – blue moon this month – and next to her, clear, close as a lover, Mars. This night I have no lover of my own   to help me celebrate. Even the cats are all gone who used to come with me at midnight into the circle of my patch of earth, my garden   and my sacred trees, to greet the moon. Yet the whole earth pulses with love in this time of alive silence: a throb beyond our ears to hear, yet not beyond our feeling. The street, empty of people, is full   of presences co-existing, just out of sight. They come in peace. I greet them so. Somewhere else, there is fighting, there is pain, there is death, there is grief. Tomorrow I may have to face them, those conditions, but tonight – I stand in love. My heart embraces the Universe   as my hand blows a kiss to the moon. Inside, I pour a nip of ginger wine. I write a poem for Beltane. (Poetry as fe
Read more 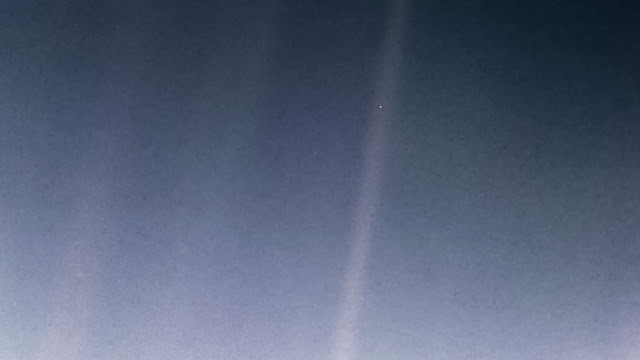 Hello Earth H ere I am, dear Earth, fresh home from the Winter Solstice gathering of the Goddesses of Shining Light. As around the circle we spoke our names, each added the statement, ‘I am here’. Some said, ‘I am glad to be here.’ One simply said, ‘I am’.    Men may attend our Solstice and Equinox events, by invitation. The only man this morning, a first-time guest, said, ‘I am honoured to be here’. One of the women, who works with family violence victims, acknowledged him later: ‘How often do we hear a man say that? “Be the change that you want to see” – you are the change. Thank you.’ E arth, we saw a photo of you today, which one of us had on her phone. Taken from Voyager 2, near Saturn, it is famous as ‘the small blue dot’. What excited us was the huge ray of sunlight in which that dot floated. We as a group constantly use our collective energy to bathe the earth in light. L eaning in, stretching up, bowing down, skipping in a circle, twirling on the spot, we danced for
Read more